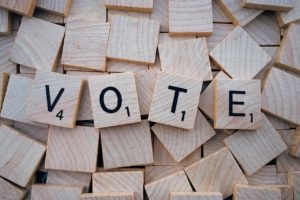 Did you know only 40% of Americans on average vote in midterm elections? That’s a pretty low number! But you can do something about it – at least for the future. This Election Day, put your parent multitasking skills to good use; while you’re casting your vote, take the time to teach your child about voting and why it’s important.

Not sure how to talk about politics with your child? Here are some tips to get you started.

Talk about your values and why you hold them.

Election season is a good time to have a conversation with your child about your values. Especially with the large number of amendments this year in Colorado, there’s plenty to talk about. You can explain to your child why you’re voting one way or the other on a particular amendment – do you care about the environment, infrastructure, or education? Tell your child about why these issues are important to you.

Illustrate voting by letting your kids vote on a kid-sized issue.

How does voting work? Give your kids an idea by having them vote on something small, like where you go out for dinner or what game you play as a family one evening. Explain to them that voting is an opportunity for their voice to be heard. You can spark conversation by asking questions like “How did it feel when you got to vote for where to go for dinner, instead of me just deciding?”

To take the illustration a step further, you can make it the case that your child’s pick “loses the election” (this is easiest if there are two parents and one child “voting,” but you can think of ways to make it work with more/less parents and kids). Use this as an opportunity to explain what happens when you vote and your choice doesn’t win – and how you can move forward. This is also a good opportunity to talk about disagreement in politics, and why it’s a good – and healthy – thing.

Have your older children do some research on the candidates for an office.

The best way to be a good citizen is to know the issues before you hit the ballot box. If you have older children, have them look over the websites of two candidates for a specific office. Ask them to make lists of what they do and don’t like about each candidate, and ultimately who they’d vote for. Dig deeper by asking them “Why does that issue matter to you?”

Conduct a family vote for a real office or amendment.

Ask your older children to research the candidates/issues as described above, and if possible, explain the candidates/issues to your younger children in a way they might understand. For example, “Candidate A cares most about giving more money to building bridges and roads. Candidate B cares most about giving more money to education.” It’s okay to over-simplify a bit; the purpose is for the child to understand what it means to weigh issues and make a choice.

Once everyone in the family is up to speed about the candidates in an age-appropriate way, hold a vote. Ask everyone to say who they would vote for and why. Prompt your child(ren) to explain their thinking.

It’s easy as Americans to forget how lucky we are to have our voices heard through voting, but it is a right that is so critical to exercise! Start instilling an appreciation for voting in your child early by involving them in voting this Election Day.

P.S. – Interested in how to vote on issues affecting kids? The American Academy of Pediatrics has a great resource on what’s at stake for children this election.