Once upon a time, measles was a common, albeit dangerous, childhood illness in the United States. Then advancements in medicine made it quite rare in the US for decades, rendering it a very minor concern. But in recent years, there has been a stunning rise in measles outbreaks in the US – due largely to the increasingly popular practice of skipping recommended vaccinations (don’t worry – we aren’t here to judge anybody – and we’ll get into that more below). This rise in cases has left many parents (and certain Denver integrative pediatricians) concerned, so we thought we’d take some time to talk about this issue.

A Brief History of Measles

The measles virus is estimated to have emerged (from cattle, of all places) and become a more common infectious human disease around the 11th or 12th centuries. As we mentioned, measles was once a common childhood medical condition, and it often wasn’t serious when good health care was available. But in far too many children the infection has caused horrible brain infections (encephalitis), pneumonia and even death. Prior to the measles vaccine becoming widely available (and widely used), it is believed that 7-8 million children died each year worldwide from measles. In 2000, there were around 555,000 childhood deaths stemming from measles worldwide before the measles vaccine dropped that number down to 122,000 by 2012. Thanks to the vaccine and advanced pediatric care, the United States was not a major contributor at all to this total during that time, but the disease is clearly a threat to child and family.

So What’s Going On Now?

In recent years, reported measles cases in the United States have been on the rise again. After 372 reported cases in 2018, there have already been 268 in 11 states in 2019 as of March 14 according to the Center For Disease Control (CDC). And guess what? Colorado’s one of those 11 states. Hopefully this illness won’t be showing up too often in Denver pediatrician’s offices, but it is a serious concern. Measles is often spread by unvaccinated travelers to foreign countries where measles may still be much more common who then return to the United States and come into contact with other unvaccinated individuals. It is highly contagious and an infected person across the room coughing could infect you. Pockets of unvaccinated communities can easily lead to outbreaks, as they have in New York, Washington. In Rockland County, New York, a state of emergency has been declared owing to a severe outbreak of the disease (more than 150 confirmed cases), including a ban on unvaccinated children in public spaces. And given the large pockets of unvaccinated children in Colorado, our great state is at a very high risk for an outbreak, according to Sean O’Leary, MD from Children’s Hospital Colorado. 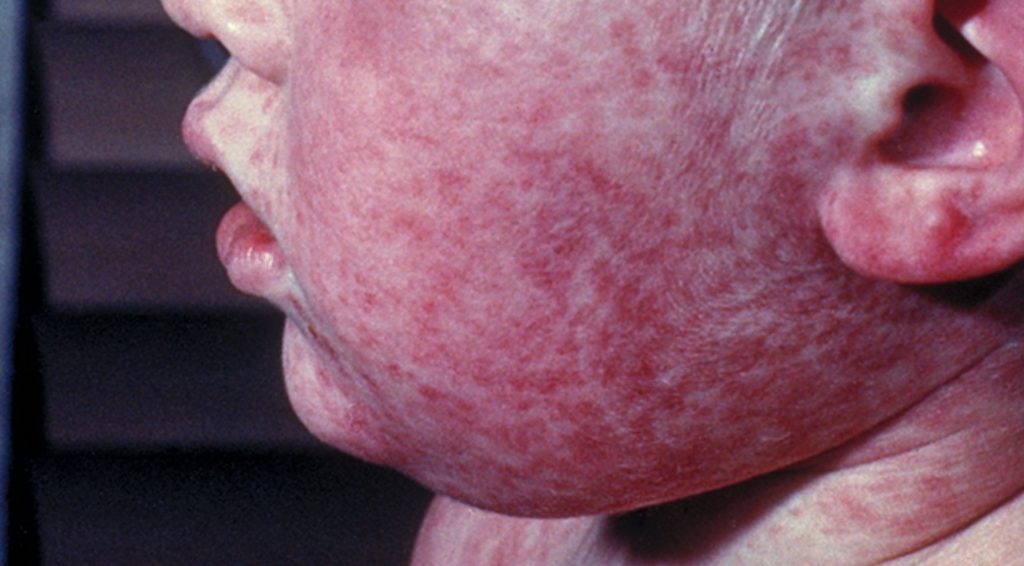 What are the Symptoms of Measles?

Measles can be a bit tricky because its distinctive symptoms may not be obvious right away. Typically, symptoms begin around 10-14 days following exposure. They usually entail a high fever for a few days, followed by a cough, conjunctivitis (pink eye) and typical head cold symptoms such as sneezing and a runny nose. Eventually, a reddish-brownish rash will appear and spread over large portions of the body – and this is generally when you think, “Hmm. Maybe this isn’t just a cold.” The tricky thing is that these pre-rash symptoms may be indistinguishable from cold symptoms, and parents may be tricked into thinking their child has an annoying, but relatively harmless, cold. But once the rash appears, your child clearly has measles and may have exposed your family, their school, and many others. Generally, measles resolves after approximately three (very unpleasant) weeks.

There can also be a lot of nasty complications stemming from measles, as discussed above. Measles can cause serious pneumonia, bronchitis and brain infections that can lead to permanent brain damage and other chronic conditions. It is especially dangerous for children under the age of five.

Ah, the big question. The primary focus of our holistic approach is your child’s health and happiness – their mind, body and spirit. We are firm believers in the power of natural healing and holistic pediatric care that may not be ultra-conventional, but we are also believers in safe and effective traditional Western medicine such as the measles vaccine. The evidence for the effectiveness of the measles vaccine is overwhelming, and there is no scientific link between vaccines and autism. We strongly recommend safe and effective treatments – such as the measles vaccine – that can save your child from serious (or minor) illness. It breaks our hearts to see children suffering from preventable illnesses, and we do not in any way see these vaccines as running counter to our belief in patient-centered, integrative medicine. We would also like to note that every single PIP provider has fully vaccinated their own children.

That said, we do understand and respect that some parents do not agree with this stance. Partners In Pediatrics has a unique approach to this matter that is unique in pediatric health care and primary care in general. We strongly support and recommend the CDC/American Academy of Pediatrics’ vaccine schedule while taking a client-friendly approach where we will empathetically work with you and your preferences.

As holistic pediatricians who combine conventional medicine with an integrative approach, we believe in honoring our patients and their families’ wishes. If you do not wish to vaccinate your child, we will work with you non-judgmentally to honor your desires for your child’s pediatric care. This is rare among Denver pediatricians – even integrative ones. We’re not here to judge – we’re here to be your family’s supportive medical home!

If you ever have any questions or concerns regarding measles or the measles vaccine, please get in touch with us today. Stay healthy out there!